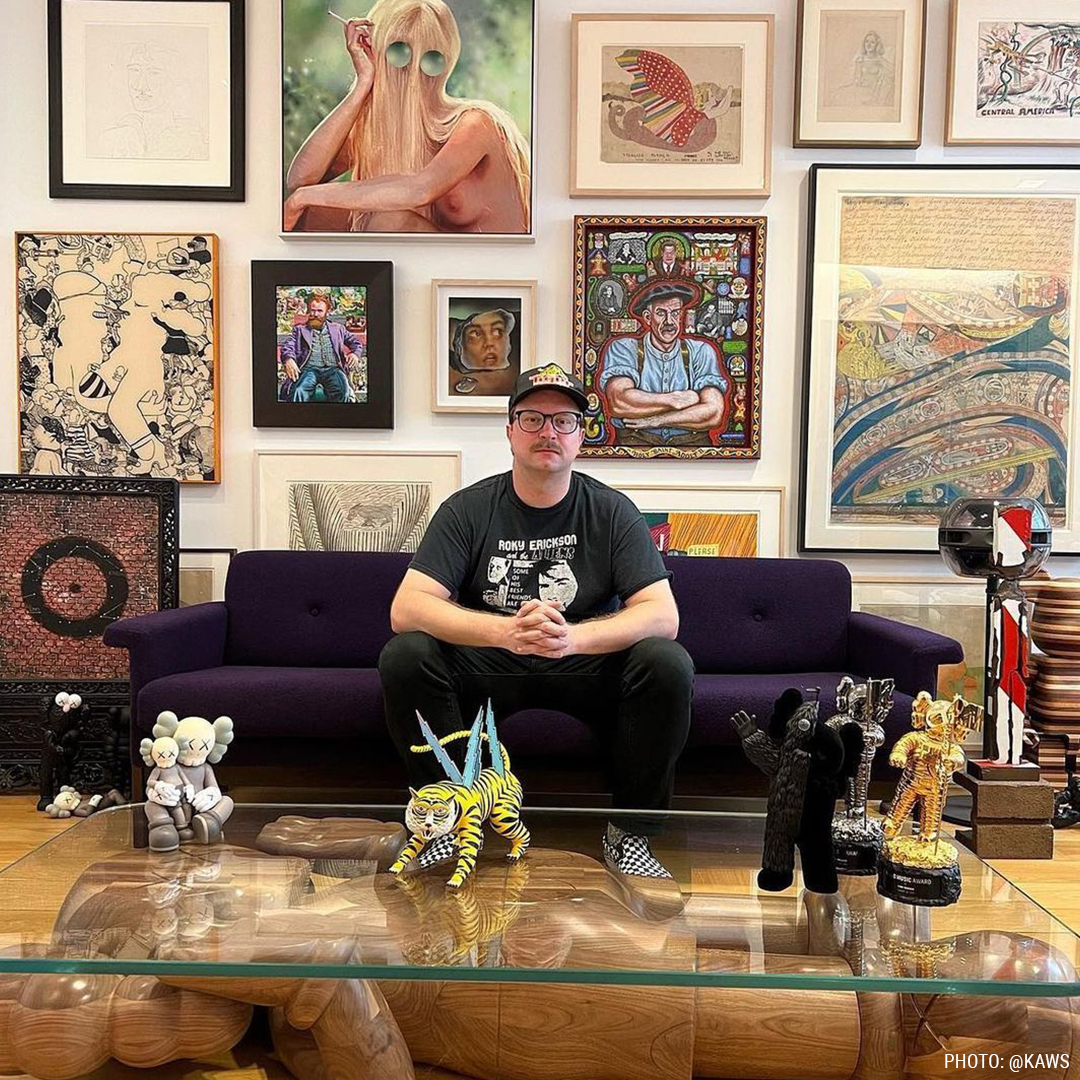 - How did you meet with the ANP? Can you quickly introduce the program to us?

I first started working with RVCA’s Artist Network Program in 2003 when I started exhibiting art in Los Angeles. They were working closely with artists who were coming out of the New Image Art scene and I guess my work was a natural fit. Early on I started just collaborating with t-shirt graphics but that has evolved now to include countless types of apparel and now even this vinyl figure. The ANP has also sponsored many art projects I’ve been involved with over the years. Murals, exhibitions, even helping out with a gallery I helped run a few years ago. 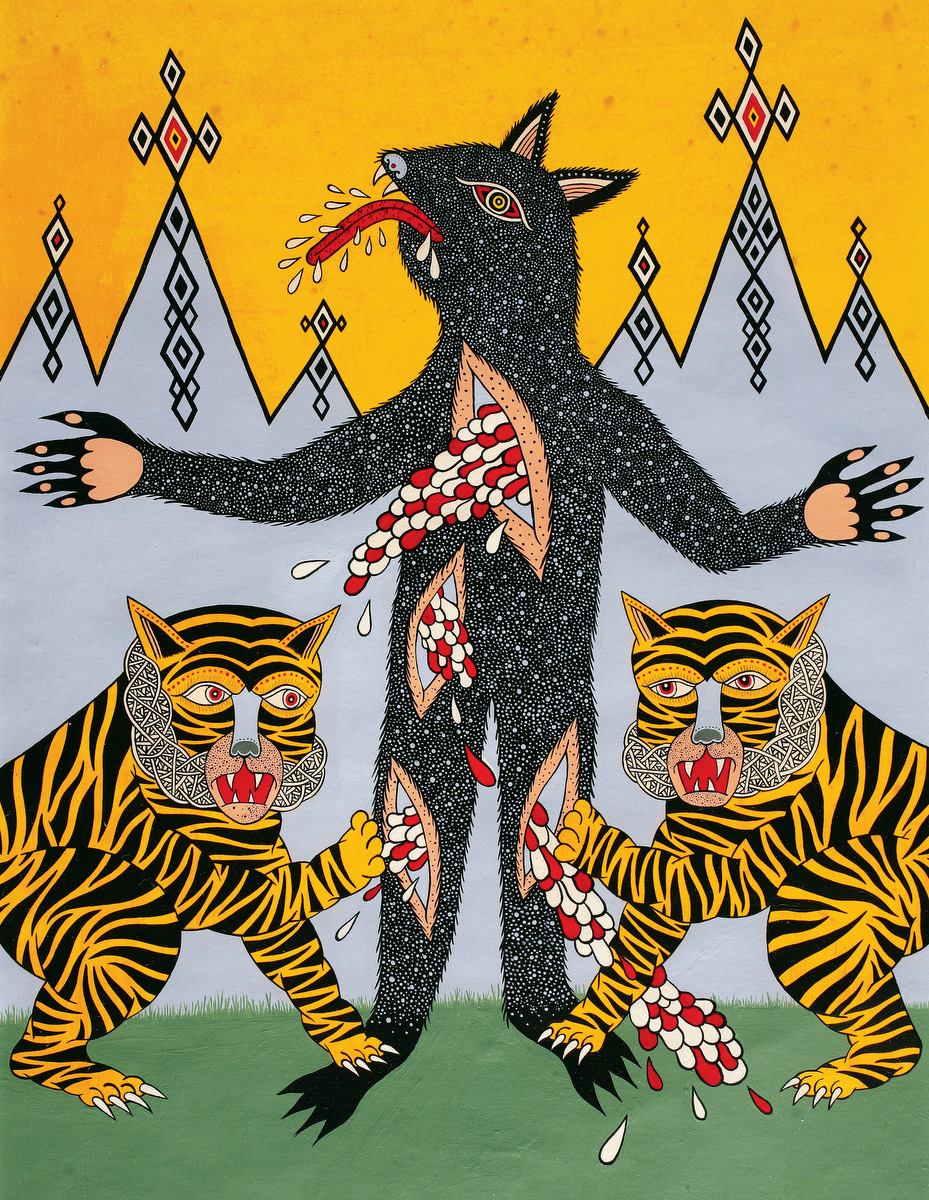 ⁃ Your artistic universe is unique, it is imbued with symbolism, surrealism and it also connects the primitive and the modern, do you agree with that?

Very much so and it has definitely evolved over time. When I first started making drawings this way I came at them as if they were artifacts made by the peoples depicted in the pictures. As if a codex had just been discovered. I’d begin to include imagery based on more and more things I was exposed to. I am a collector of images and have thousands of pictures I keep to pull inspiration from. Also, as more people began seeing my work they’d ask question that would lead to more investigation. For example at my first gallery show someone asked if I was familiar with Ethiopian art. I was not at the time but it made me curious. Now I can understand that the way I was drawing eyes at the time was probably the reason for that question.

⁃ You depict an epic, an imaginary world, in what era are we?

I’d say its No Time or All Time. Especially lately I’ve been adding real life inspirations to my work. Be it drawing objects I physically have or themes based on political and cultural ideas of our time. I’ve just been starting a new series that incorporates these ideas. But also I include allusions to the time of myths and concepts of a future. I particularly enjoy the ambiguity that there are certain things in my work that are instantly familiar but the way they are portrayed allows for interpretations however the viewer chooses. 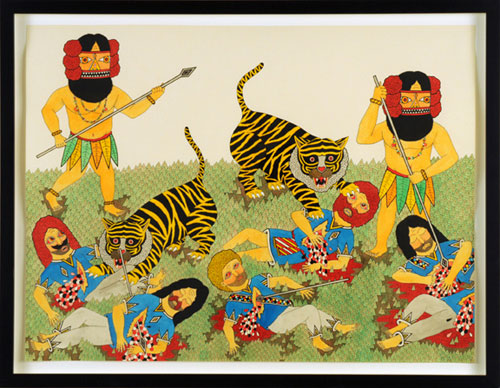 ⁃ What do these recurring characters represent, these men with mustaches, these creatures, this tiger...?

In some ways I’m sure they are different aspects of myself. Some are for sure celebrations of imagery I’ve encountered over time, whether topics I’ve chosen to research or others of unknown origin that left an impact on me. I’ve been trying to expand my inventory of characters. I drew too many mustached men for a while there. And now the goal is to include as wide of a variety of individuals as I can. But there will definitely be plenty more tigers.

⁃ To come back to the ANP and more specifically to RVCA, how did you approach the idea of creating a collection?

Lately I had been working on a series of black and white portraits. They were head and shoulders with a starkly graphic head on top and a patterned field almost like a landscape under the neckline. It only seemed reasonable that these could work well for a collection with RVCA. The bold faces as graphics and the patterns repeated for pants and what not. Then the collection began to grow to include so many articles I hadn’t made before like knit sweaters, and athletic wear, even legitimate boxing trunks. I’d been wanting to branch into other garments for quite a while and couldn’t have been happier with it. I’m looking forward to pushing it even further next time.

- Before we introduced you to Artoyz, were you sensitive to Toy Design? Or to certain leading artists in the field? Very much so. I’m a toy collector though I gravitate towards a range of interests. I have a large collection of folk art and vintage plastic tigers and a variety of things relating to my youth. I love the aesthetic of bootleg toys where the likeness isn’t correct and the molds are even sloppier than the paint. And of course I know the prolific range of figures KAWS has produced.

⁃ Does 'Tiger Bolts', the vinyl sculpture mean something special to you? Conceptualizing a work in 2D and even transposing it into 3D must be a special sensation, no? It was such a strange sensation seeing the 3D rendering for the first time. And this drawing in particular I drew almost twenty years ago. It was the very first t-shirt design I ever made with RVCA. So it’s a landmark image, possibly the most seen image I’ve produced due to RVCA’s use of it over all the years. So to see what that tiger looks like from the front or the other side, I mean I’ve been wondering that for decades!

⁃ If you had the possibility of transforming another of your works into a figurine, which would it be? This is way too hard to answer. I’d love for so many more of my characters to become figures. All of them if I could!